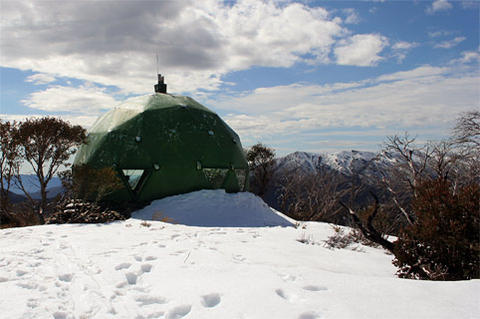 At an altitude of 1600m on the North West Spur of Mt. Feathertop, you'll spy an incongruous structure perched atop a prominent knoll. This geodesic dome features a small anteroom, triangular windows and a matte-green paint job. Commanding an exceptional view of Feathertop and its surrounds, MUMC Hut (also known as the Mt. Feathertop Memorial Hut) is a beacon and a refuge for bushwalkers and ski-tourers in all weather conditions.

Unlike many other Australian bush huts, MUMC Hut's design gives it a unique and recognisable signature. Structure notwithstanding, it is also a fully-equipped shelter, equipped with suspended sleeping area, a indoor sink and tap water, pumped from a rainwater tank in the cellar water (MUMC members frequently joke that such water comes from the "mysterious Hut creek"), numerous old pans, tables, seats and most importantly—playing cards. What else will you do in a storm?

Not all is a bed of roses: the Hut didn't mysteriously emerge from the surrounding rocks and snowgum trees. The uninformed would assume that everything was helicoptered in or otherwise driven to the site and that such a design would have been the work of professional builders. On the contrary; the Hut was both designed and built by MUMC members in the mid-1960s—an unskilled labour force that relied on its own resourcefulness and the ingenuity of a Civil Engineering student called Peter Kneen.

In 1965, Kneen, then an Ormond College resident studying final-year Civil Engineering, devised a design that would accommodate the expected the 30- to 40-odd users at the time. After some deliberation over other more-conventional concepts, Kneen and the Club Committee eventually decided on the geodesic dome. Its advantages include the ability to withstand adverse weather conditions, such as high wind and snow; its rigid structure, due to geometry, has an innate resistance to leaning—unlike the Bungalow Spur Hut which had a tendency to lean and later disappeared; it utilised available space very efficiently by having a suspended sleeping area in the mezzanine.

In order to build the Hut, the raw materials and tools needed to be moved to the proposed building site. Without the funding for helicopter access it was concluded that raw manpower would be needed for transportation.

Numerous approaches to the site were debated. One early consideration was via Diamantina Spur on The Razorback but was eliminated when it was decided to use Land Rovers to cart materials to a reasonable starting position on the North Razorback, at the end of Stony Creek Top Track.

Another was a direct route from Feathertop's North Peak; however, the thought of descending into the valley of thick shrubbery, then reascending, was not appealing. At this time the North West Spur track wasn't fully cleared. Kneen describes:

The most direct route across from East to West in a straight line to the hut is out! The bush is very thick and the country very steep. Next alternative was a spur heading down from the north end of Feathertop North Peak, leading to the west into the gully. This is Okay for the top half but again the lower part is very thickly overgrown and extremely steep. However up the other side the bush is quite open and grassy most of the way to the site. The third alternative is to continue around, contouring around Feathertop, following on from the exact point where the previous route descends to the gully. This one follows a good cattle track the entire distance and could be used by anyone. This is recommended to most people.

As Kneen states, the final decision was a circuitous route from the North Peak that wouldn't involve descending into the valley, but contour around the north below the summit of Feathertop. This would enable the work parties to use a few Land Rovers to transport materials to a point high on the North Razorback, then manually carry the materials across the slopes and down to the building site. This summit route is familiar to the denizens of MUMC Hut, though the old North Razorback track is now becoming overgrown and disused but for the occasional adventurer.

The construction of the hut was a mammoth task which involved over 200 people and an astounding organisational effort. Around 5 tonnes of building materials, 2 tonnes of food and 500kg of tools and equipment were carried in over the North Razorback track from the end of the now-closed Stony Creek Top 4WD track.

The first stage of construction involved surveying the site. Explosives were used for the initial excavation due to the rockiness of the area, after which holes were dug for the main support posts which were concreted in. The support posts are 5" square and 6' long, made of redgum wood.

After concreting the posts in and building up the rock wall, the floor beams were placed. The cellar was excavated afterwards and the support stumps trimmed to the required lengths—a geodesic dome's equator is not flat, but of two varying heights.

Once the floor and foundations were set in place, the rest of the aluminium frame was erected. A significant degree of accuracy would have been required to ensure everything joined up correctly on-site: the design allowed for some misalignment and field improvisations. 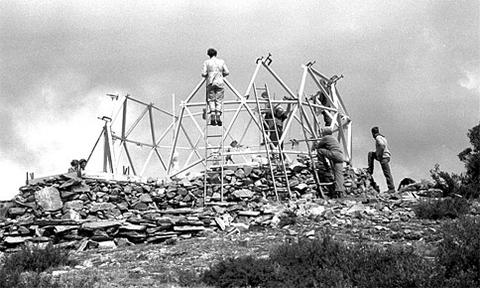 The aluminium sheeting was pre-cut in Melbourne using a standard 4-foot wide roll; arranged on the frame, they overlap along the seams to help water management. They were sealed with a glue then rivetted in place to the beam.

However, at the joins, or nodes, the sheeting did not fully overlap; to finally seal the gap, additional aluminium squares were cut, glued and these caps were rivetted in place.

Once the hut was built, the interior was furnished with a sink and other assorted goodies.

Over time the interior features changed slightly: the sink cabinet is gone; there was once a wood stove in the center of the dome but is now no more, for conservation and environmental reasons. Also, condensation became a problem (initially, sufficient insulation was not installed) and this was addressed later.

At the time of its construction, the Hut caused quite a stir. Back then it was an unpainted shiny silver, even with all the appropriate permissions obtained for its construction, some felt the Hut was too prominent as it could be seen from a great distance. So the hut has been painted a drab green dubbed "MUMC Hut Green".

The Hut is maintained by MUMC, although it is always accessible by the public. Every winter at a weekend closest to a full moon, club members celebrate another year - the annual Midnight Ascent.

The hut has been maintained over many club trips made by members over the years. However, it is finally due for some more major renovations. If you are interested in being involved in this process or just finding out more, please contact our current Hut Warden, Emily Webb Ware at .